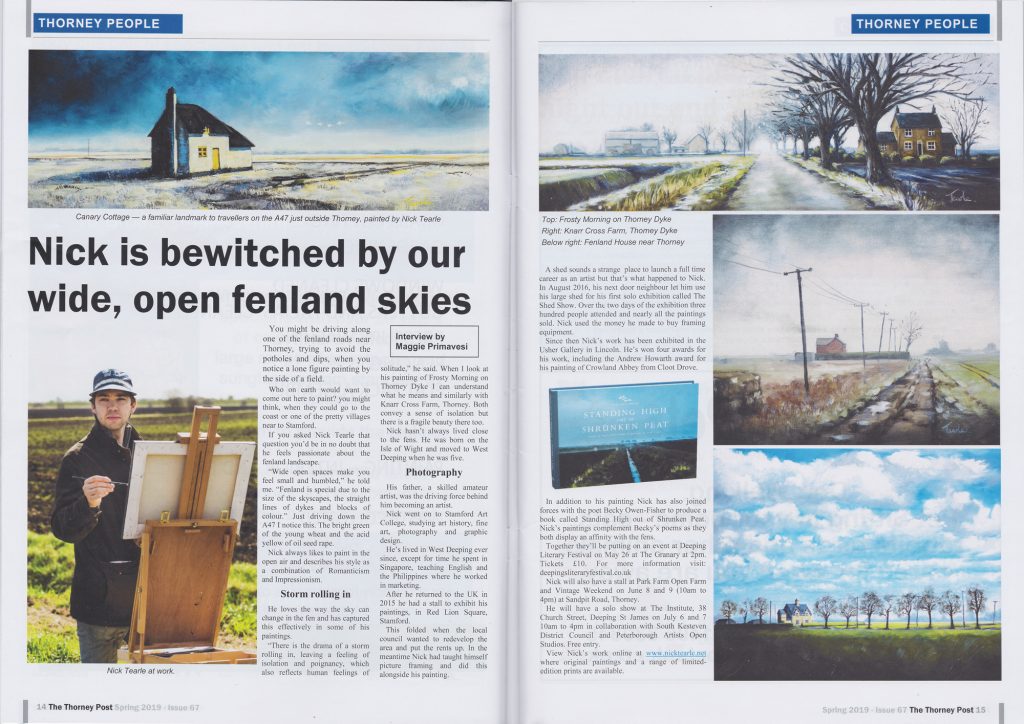 You might be driving along one of the fenland roads near Thorney, trying to avoid the potholes and dips, when you notice a lone figure painting by the side of a field.

Who on earth would want to come out here to paint? You might think, when they could go to the coast or one of the pretty villages near to Stamford.

If you asked Nick Tearle that question you’d be in no doubt that he feels passionate about the fenland landscape. ‘Wide open spaces make you feel small and humbled,’ he told me. ‘Fenland is special due to the size of the skyscapes, the straight lines of dykes and blocks of colour.’ Just driving down the A47 I notice this. The bright green of the young wheat and the acid yellow of oil seed rape. Nick always likes to paint in the open air and describes his style as a combination of romanticism and impressionism.

He loves the way the sky can change in the fen and has captured this effectively in some of his paintings. ‘There is the drama of a storm rolling in, leaving a feeling of isolation and poignancy, which also reflects human feelings of solitude,’ he said. When I look at his painting of Frosty Morning on Thorney Dyke I can understand what he means and similarly with Knarr Cross Farm, Thorney. Both convey a sense of isolation but there is a fragile beauty there too. Nick hasn’t always lived close to the fens. He was born on the Isle of Wight and moved to West Deeping when he was five.

His father, a skilled amateur artist, was the driving force behind him becoming an artist. Nick went on to Stamford Art College, studying art history, fine art, photography and graphic design. He’s lived in West Deeping ever since, except for time he spent in Singapore, teaching English and the Philippines where he worked in marketing.

After he returned to the UK in 2015 he had a stall to exhibit his paintings, in Red Lion Square, Stamford. This folded when the local council wanted to redevelop the area and put the rents up. In the meantime Nick had taught himself picture framing and did this alongside his painting.

A shed sounds a strange place to launch a full time career as an artist but that’s what happened to Nick. In August 2016 his next door neighbour let him use his large shed for his first solo exhibition called The Shed Show. Over the two days of the exhibition three hundred people attended and nearly all the paintings sold. Nick used the money he made to buy framing equipment.

Since then Nick’s work has been exhibited in the Usher Gallery in Lincoln. He’s won four awards for his work, including the Andrew Howarth award for his painting of Crowland Abbey from Cloot Drove.

In addition to his painting Nick also joined forces with the poet Becky Owen-Fisher to produce a book called Standing High out of Shrunken Peat. Nick’s paintings complement Becky’s poems as they both display an affinity with the fens. Together they’ll be putting on an event at Deeping Literary Festival on May 26th at The Granary at 2pm. Tickets £10.

Nick will also have a stall at Park Farm Open Farm and Vintage Weekend on June 8th and 9th      10am to 4pm at Sandpit Road, Thorney.

He will have a solo show at The Institute, 38 Church Street, Deeping St James on July 6th and 7th 10am to 4pm in collaboration with South Kesteven District Council and Peterborough Artists Open Studios. Free entry.

View Nick’s work online at www.nicktearle.net where original paintings and a range of limited edition prints are available. 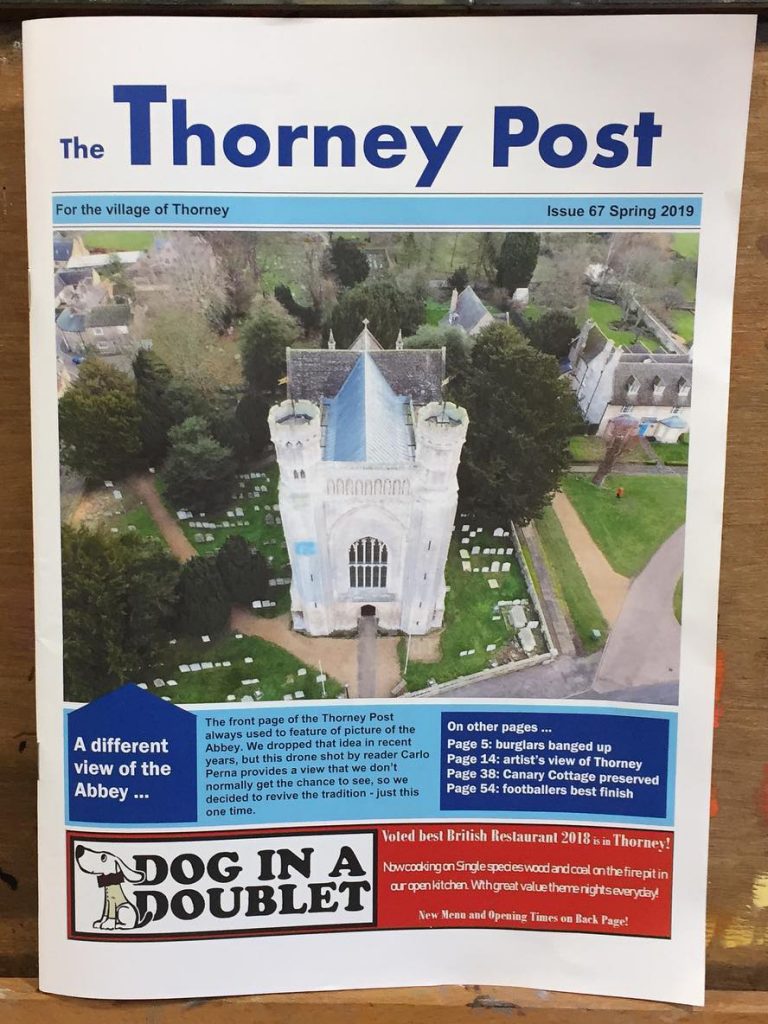 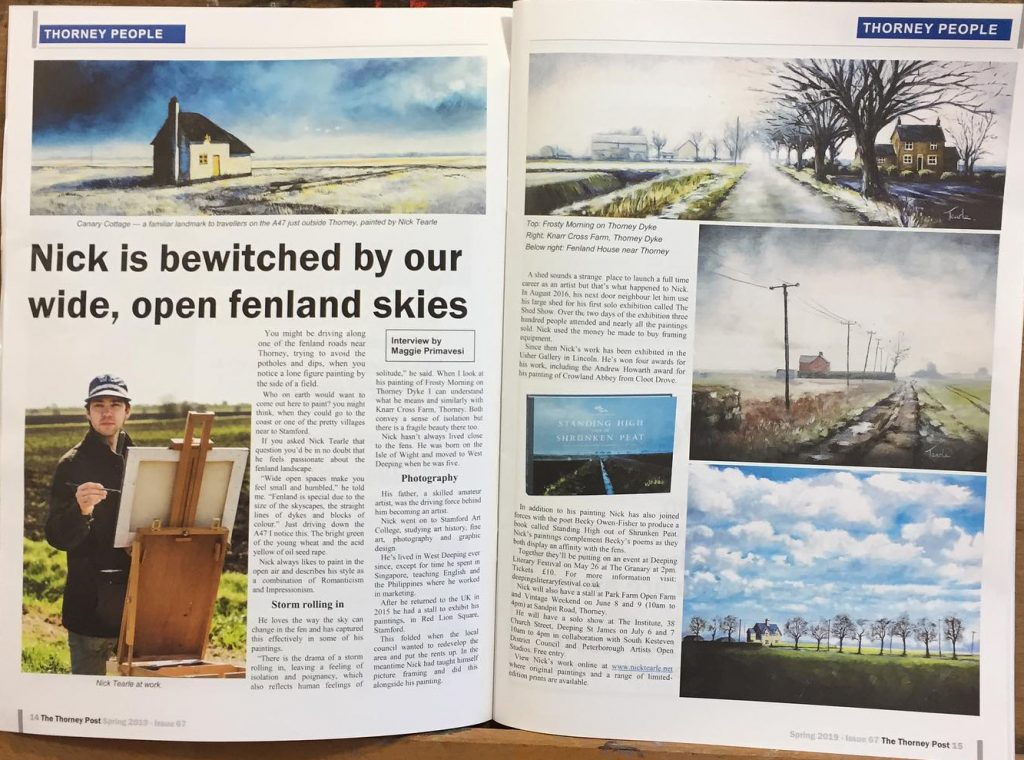 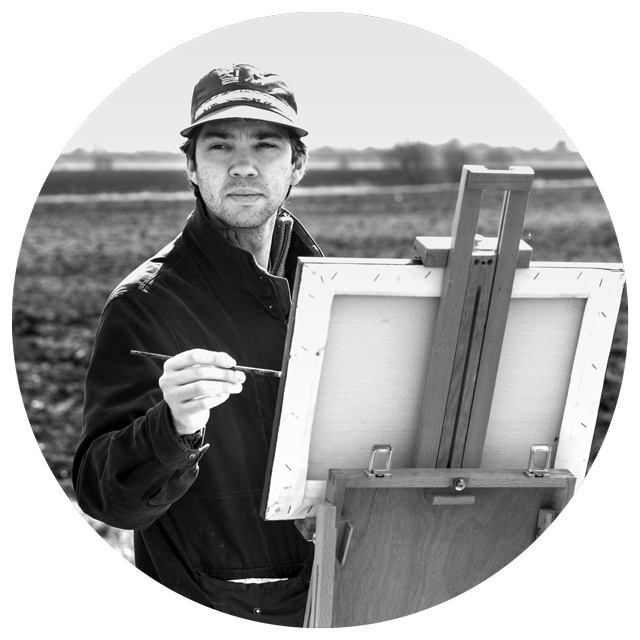